Omar Sharif plays a Russian and Doctor Zhivago was shot mostly in Spain by a British director, produced by an Italian. “Lara’s Theme,” the schmaltzy leitmotif that evokes the Julie Christie character, can still be heard in elevators today. Aspects of this picture seem dated, but there’s an awful lot to like, especially in these troubled times.

Let’s start with an early scene:  it is 1912 and a group of workers are demonstrating in the streets of Moscow, led by the idealistic Pasha Antipov, a young social democrat.  An equally young and idealistic Yuri Zhivago watches the scene from a balcony, and witnesses the violence as the workers are mowed down by Cossaks on horseback.  Pasha is radicalized by the event and becomes a revolutionary, lashing out against the regime responsible for such brutality, but growing more ruthless as the story progresses.

Yuri turns away, turns inward.  Each new upheaval in Russia, each act of violence, reaffirms his determination to live, to love, and to create.  Sharif registers pain in those soulful brown eyes.  Unlike Pasha or the commander of the partisan unit that conscripts him later in the picture, his character never loses his humanity, never sacrifices his concern for individuals, their lives, their hopes, their needs in the name of “justice” or some other abstract good. 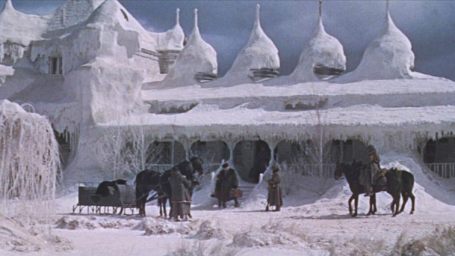 And so we come to another key scene.  Yuri and Lara have taken refuge in the frozen dacha that belonged to Yuri’s wife’s family.  In the early morning, Yuri sits at his desk writing poems.  Wolves howl at the edge of the property, but inside the frost-starred window, we see the warm glow of Yuri’s candle.  A mere moment of safety, of peace; we know it cannot last.  But the beauty of that moment sustains us. May we all find hope in the glow of Yuri’s humanity.