I love Rosalind Russell in this film.  (I love Cary Grant too, but then, I love him in just about everything.) 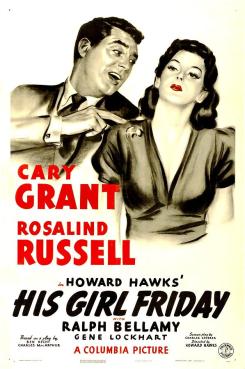 Russell shines whether she’s bantering with the boys in the newsroom or parrying Grant’s insults.  She knows how to take care of herself, that’s for sure.  Here’s how she talks to Grant’s editor character, who happens to be her ex-husband:

Grant’s trying to prevent Russell’s character from marrying another man, and leaving the newspaper business for good.  He took it hard, the divorce.  Or so he claims.  But Russell shows not an ounce of sympathy:

“A big fat lummox like you hiring an airplane to write: ‘Hildy, don’t be hasty. Remember my dimple. Walter.’ Delayed our divorce 20 minutes while the judge went out and watched it.”

I can’t help myself, quoting dialogue left and right.  It’s just so good.  Ben Hecht and Charles MacArthur wrote the original play, “The Front Page,” based on their experiences as Chicago reporters, and the story has an authentic feel.  What stands out (apart from the jokes about picaninnies — a reminder that the play dates to 1928) is Russell’s character’s nose for a story.  The boys in the newsroom know it:

Newsman: Well, I still say that anybody that can write like that ain’t gonna give it up permanently and sew socks for a guy in the insurance business. Now I give that marriage three months and I’m layin’ three to one. Any takers?

Hildy: [entering the room] I’ll take that bet. Geez. It’s getting so a girl can’t leave the room without being discussed by a bunch of old ladies…

Newsman: Oh, don’t get sore, Hildy. We were only saying a swell reporter like you wouldn’t quit so easy…

When Hildy’s got a scoop, nothing on earth can compete.  She’ll see her fiancé rot in prison, her future mother-in-law kidnapped by a thug.  She’ll wrestle a gun away from a lunatic killer, lie to the cops.  And marry Grant all over again.  But who can blame her?