Subversive comedy is my favorite and M*A*S*H is THE subversive anti-war comedy of all time. They cleaned it up for the TV show—more one-liners, less bite, and a lot less blood in the operating room—although the anti-war message still comes through loud and clear. 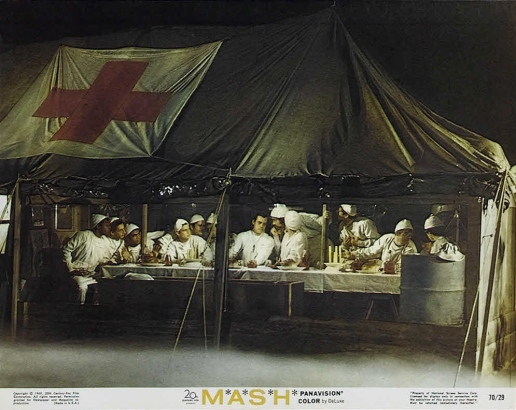 The movie opens with the words, “And then there was Korea…” scrolling down the screen, followed by the closing lines of General MacArthur’s 1951 Farewell Address to Congress. “I have just left your fighting sons in Korea,” the old soldier said. “They have met all tests there, and I can report to you without reservation that they are splendid in every way.”  Triumphant parade music plays behind the General’s words, undermining their seriousness.

And who are those splendid fighting sons in Korea?  We see two of them (Hawkeye Pierce and Duke Forrest) steal a jeep, a trio of hapless MPs in hot pursuit, Keystone Kop style. 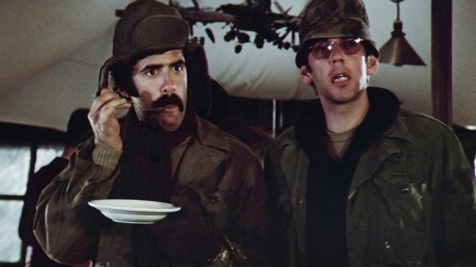 Arriving at the mess tent, swigging whiskey from a flask, Duke and Hawkeye put the move on some nurses and sass their commanding officer. Sure, they’re surgeons, very good surgeons, but watching them at work, you’d think they were car mechanics, the sort likely to lose tools under the hood. Bantering over the bodies they’ve opened up, flirting with the nurses while casually amputating a limb.

War isn’t hell to these guys, but it can be darn inconvenient. Try making a proper martini three miles from the front without olives! Best to bring your own, as the new guy, Trapper John McIntyre, does. In their off-duty hours, our splendid fighting sons manage to “cure” a homosexual and drive their uncool bunk-mate around the bend, sexually humiliate the officious nurse, “Hot Lips” Houlihan, and make fun of Japanese people, just for good measure. Okay, the film was released in 1970 and does show signs of age. 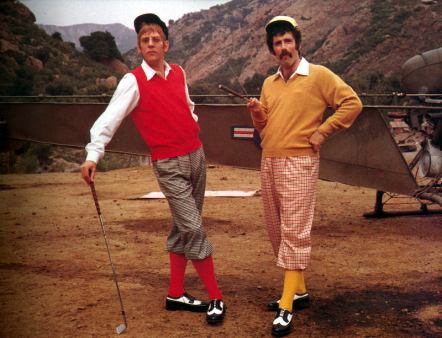 Back to the bite. The screenplay was written by Ring Lardner, Jr.  In 1942, he’d won an Oscar for Woman of the Year, Katharine Hepburn and Spencer Tracy’s first picture together; for a time, he was a hot property. But Lardner’s Communist Party affiliation got him blacklisted during the McCarthy era. Subpoenaed before the House Committee on Un-American Activities, he and nine other Hollywood figures refused to name names and went to prison. M*A*S*H was Lardner’s first credited screenplay in twenty years and won him another Oscar. No wonder the film’s got an edge.