I never knew what a tremendous influence Bresson’s film exerted on other filmmakers.  Paul Schrader says it’s been behind everything he’s ever done.  “Pickpocket gave me the courage to write Taxi Driver, and from that point on I have never had a problem with characters that appear beyond empathy,” he claims.

The first time I saw “Pickpocket” was 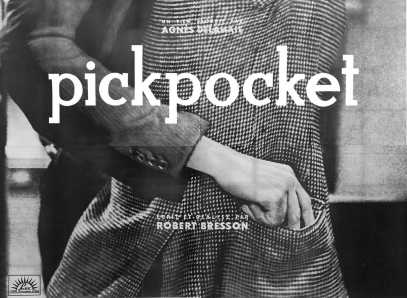 in the mid-1970s and the question of whether or not I should like the main character, Michel, never occurred to me.  I was in college, a philosophy major.  Angst and alienation were the order of the day. Michel was what you’d call authentic, living according to his personal code and fully accepting the consequences of his own action:  Exhibit A in Existentialism 101.  He showed no compunction about lifting people’s wallets in the metro.  He didn’t seem to need the money, he just stole for the thrill of it.  Pickpocketing was the one thing that made his life meaningful—not friendship, not love, not even being a good son.  Hell is other people, you know?

And yet, by the end of the film, Michel finds himself in love with a good woman.  Two lost souls come together and recognize their need for one another.  “Ah Jeanne, what a strange path I had to take to get to you.”  A sappy line, but it felt right, and the fact that Michel uttered it behind bars didn’t detract one bit from my satisfaction, then or now.

In a documentary by Babette Mangolte included with the supplementary material on the Criterion DVD of “Pickpocket,” the actress who plays Jeanne speculates that Bresson wanted to capture the moment of letting go.  “He wanted to retrieve that moment of abandonment, I think.”  All that angst, the tug-of-war that so often seems to be the point of life.  And then one day we figure it out.  All we’ve got to do is put down the rope.