Clint doesn’t wear the poncho until the end of the movie. Two hours in, he’s changed outfits several times, trading his dark patterned shirt and duster for a Confederate army uniform, then changing into a sheepskin vest and the trademark beaver hat, but he dons the poncho only as an afterthought. 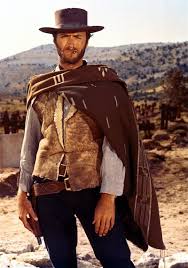 He takes it off a dead Confederate soldier — he’d given the boy his own coat, as a blanket, then didn’t have the heart to take it back after the kid died. He’d given the boy a couple of puffs from his own cigar, too.  Held the thing between the kid’s lips, a surprisingly tender gesture.

Clint and his cigar. That’s how his character shows emotion. When he and the Eli Wallach character, Tuco, first meet and Clint gets the idea of selling the Mexican bandit for the bounty on his head, he seals the deal by putting his cigar in Tuco’s mouth. Later in the picture, the two are heading away from the Spanish Mission where Tuco has been rebuffed by his brother, a priest. Tuco’s trying to put a good face on it, telling Clint’s character that his brother gave him a bowl of soup and begged him not to leave, but Clint’s character knows the truth.

“After a meal, there’s nothing like a good cigar,” he says, handing Tuco his cheroot.

I wouldn’t change a thing about this movie. Not a single thing. Ennio Morricone’s score: can’t get it out of my head. Eli Wallach’s Brooklyn accent: there he is, taking a bubble bath in some half-destroyed hotel room, when a one-armed bad guy barges in, holding a loaded revolver in his left hand. The last time we saw this guy, Tuco had left him for dead after a shoot-out. He’s been out for vengeance ever since, he tells Tuco, and in the time it’s taken him to find the Mexican bandit, he’s learned to shoot left-handed.

Blam! Tuco blows him away.  “When you have to shoot, shoot. Don’t talk,” says the Brooklyn boy. Love it!