For a Cary Grant fan like myself, the prospect of watching him and Katharine Hepburn together was not to be missed this Memorial Day weekend.  “Holiday” was made in 1938, the same year as the pair’s much better known romantic comedy, “Bringing Up Baby.” This one’s a romantic comedy too, but it’s got an edge. A sad undercurrent that lends the film depth.

Hepburn plays Linda Seton, the older sister of the woman Grant’s character (Johnny) loves. The Setons are a wealthy family with the usual skeletons in the closet. In this case, it’s a younger brother with a drinking problem. Ned Seton has given up his love of music to go into business and his quiet self-destructiveness broke my heart.

It’s New Year’s Eve, and Linda has just realized that she’s in love with Johnny. 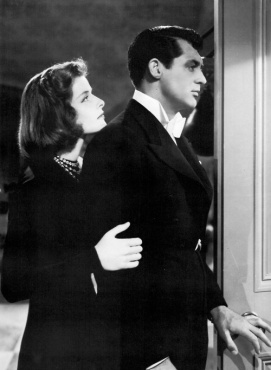 So Linda asks Ned to pour her a glass of champagne.

He considers this seriously. “How drunk?”

“How is it?” Linda persists.

“Well…” He pauses to refill his glass. “To begin with it brings you to life.”

“Does it?” she asks, brightening to the idea.

“And after awhile you begin to know all about it. You feel… important.”

“That must be good!”

“Yes.” He beckons her closer. “And then pretty soon the game starts.”

“A swell game. A terribly exciting game. You see, you think clear as crystal but every move, every sentence is a problem. It gets pretty interesting.”

Linda’s face falls as understanding dawns. “You get beaten then, don’t you?”

“Sure, but that’s good too. Then you don’t mind anything. Not anything at all. Then you sleep.”

“How long can you keep it up?”

“A long while. As long as you can last.”

“Think so? Other things are worse”.

“Where do you end up?

“Where does everybody end up?” He says this matter-of-factly. “You die.  That’s alright too.”

Shades of the bitter disillusionment of “Dinner at Eight,” which George Cukor also directed from a stage play. The romance is lovely, right up there with “The Philadelphia Story” (another Cukor gem). But the dialogue lends this film a darker tone.

Many thanks to E. H. for recommending it to me.