If all you know of Billie Burke is the goody-two-shoes Witch of the North, Glinda, you’ve missed one of the great comediennes of 1930s cinema. 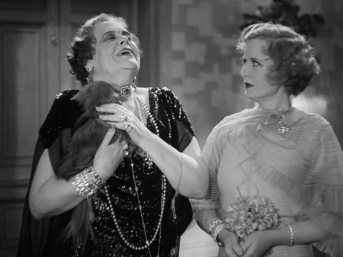 In “Dinner at Eight”—a delightful adaptation of the risqué George S. Kaufman and Edna Ferber play, directed by George Cukor, she plays a chirpy society matron worrying about having the right number of people around the table.

She’s going to have a lot worse problems than that. It starts with the aspic (in the shape of a lion, in honor of the British guests of honor). The cook had to throw it on the floor to break up the fight between the valet and the butler. One’s been stabbed and needed to have his eye stitched up, the other’s been arrested and it all had to do with the flirtatious  housemaid. And then the guests of honor up and went to Florida. Watch Burke at the end of her tether and you’ll never confuse her with Glinda again.

But Burke isn’t the only treat. You get both Lionel and John Barrymore, the latter playing a washed-up actor whose decline is quite riveting. Here’s his poignant admission to his infatuated young lover, right before he sends her back to her fiancé:  “You want to know the truth Paula?  I love you as much as I can love anyone. But it isn’t real love anymore. There have been too many.” 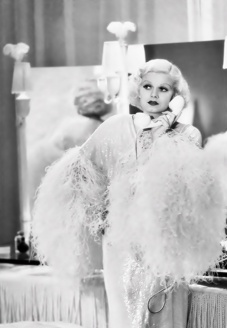 as the sexy, manipulative, and cheating wife of a crooked businessman. You won’t believe what a bad girl she is!

My favorite character is the aging actress, Carlotta Vance, played by the magnificent Marie Dressler. She’s a hoot in every scene, but she’s also the film’s moral center. Back in the days before the Hays Code, you didn’t need a goody-two-shoes in that role. Someone like Carlotta, who’s seen it all, done it all, and regrets not one minute, is just right for the part.

2 thoughts on “Dinner at Eight”