With thanks to Tim

from Hitchcock’s 1951 psychological thriller, Strangers on a Train, because it highlights the film’s zaniness. Robert Walker’s character (Bruno) is creepy, right from the beginning. You can’t imagine why Farley Granger’s character (Guy) agrees to dine alone with him in his compartment, even if the business of their feet touching beneath the table in the train’s bar suggests a homosexual attraction. Hitchcock chose the bisexual Granger for the part, knowing full well that audiences would make the association—which was even more explicit in the Patricia Highsmith novel—but Bruno is clearly a psychopath. And yet, you can’t help smiling in the scenes where Bruno appears. Like Guy, you’re drawn in, just as Hitch intended.

As a director, he left nothing to chance. Throughout the picture, we’re meant to focus on Guy’s cigarette lighter. An expensive gift from his mistress (Anne), it features a pair of

tennis rackets and an engraving: A to G. Bruno borrowed it and we just know he’s going to use it to implicate Guy in the murder of his unsympathetic wife (who was killed by Bruno). In a tense scene, Bruno drops the lighter down a storm sewer and we see his hand, coming through the grate, fishing around among the debris, a wet leaf, a chewing gum wrapper, a bit of orange peel and a scrap of paper, each item carefully selected by Hitchcock.

He cared more about the visuals than anything, and in thinking about the look of this picture, he was inspired by the cartoons of Charles Addams. This one, for example (is that Uncle Fester, enjoying himself there in the second row?) 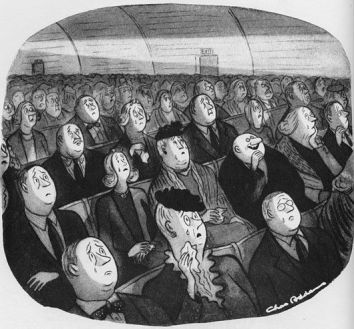 Hitch has a scene at a tennis match that clearly references Addams’ cartoon, with Bruno in the center, his attention fixed on Guy while everyone else’s heads are going back and forth, following the ball. Offbeat humor.

Another nice touch, at a cocktail party, involves a society matron (Mrs. Cunningham) who is encouraged by Bruno to imagine how she might knock off her husband. She really gets into the game, coming up with an amusing little scenario where she drives off with her husband, knocks him over the head with a hammer, pours gasoline over him and sets the whole thing ablaze. We’re going along with it too, until Bruno puts his hands around Mrs. Cunningham’s throat and suddenly things get serious.

Raymond Chandler was brought in to write the screenplay for Strangers on a Train, but had a falling out with the director and was removed from the project, his contributions deleted. He considered Hitchcock a philistine for not recognizing “that what is said and how it is said is more important than shooting it upside down through a glass of champagne.”

Sorry, but I’m with Hitch on this one.

4 thoughts on “Strangers on a Train”