I’ve been curious about The Boy with Green Hair (1948) because it was was the first feature film by blacklisted director Joseph Losey and blacklisted screenwriter Ben Barzman,

and they were pretty proud of it. Both men subsequently fled to Europe with their families rather than testify before HUAC, and managed to keep in work. Losey, who went on to direct The Go-Between — from a screenplay by Harold Pinter — was so successful, he never went home.

I admire those blacklisted artists who didn’t sell out. The first book of my historical mystery series opens in London, where my heroine, aspiring actress Cara Walden, is living with her brother Gray, a blacklisted screenwriter who chose exile over betraying his fellow travelers, just like Barzman and Losey. So I was prepared to like this film. Really, I was. But I cringed the whole way through, starting with the chorus singing “Nature Boy” over the credits.

“Nature Boy” was Nat King Cole’s first hit. It’s got a haunting melody (inspired by a Yiddish tune) even if the lyrics are inane. Everyone recorded it. At the risk of hijacking this review, I will point you to the memorable versions by Ella Fitzgerald, John Coltrane, Miles Davis, and the Gypsy Jazz guitar trio led by Romane and Stochelo Rosenberg. Worth noting are covers by Django Reinhardt, David Bowie (from the film Moulin Rouge), Johnny Mathis, Celine Dion, and, for curiosity’s sake, period pieces by Bobby Darrin, Michael Jackson, Grace Slick and the Great Society, Cher, and James Brown. There’s also Leonard Nimoy’s unforgettable version, from his album A Touch of Leonard Nimoy. (Just try and forget it. . .)

The guy who wrote “Nature Boy” has a claim on being the first hippie. eden ahbez (in the e.e. cummings mode, he preferred to leave his name in lowercase) ate raw food, lived out in the open, under the L (for Love) of the Hollywood sign, was interested in mysticism — all this in the 1940s. After his song made it to the top of the charts, he was featured in Life magazine. 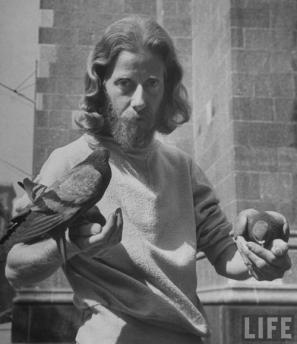 He wrote songs for Eartha Kitt, Sam Cooke, Hoagy Carmichael. People made pilgrimages to meet him and learn from him, he was such a sage, from various members of the Beat generation to Brian Wilson of the Beach Boys, novelist Thomas Pynchon, and wistful singer-songwriter (and Bob Dylan nemesis) Donovan. You can read more about ahbez in a recent Vogue piece. I understand there’s also a documentary in the works.

Such fascinating stuff I discovered, researching this picture! But the picture itself? I can’t disagree with Bosley Crowther, who called it “mere sentimental entertainment” in his New York Times review. “One gets the uncomfortable feeling,” Crowther complained, “that it is just a bright adult notion gone wrong.” Actually, I’d quibble with the use of the word “adult.” Hard to believe adults wrote this. The original story by Betsy Beaton was a parable about racism. A boy’s hair turns green, people shun him for being different. As if that’s all there was to prejudice. The best Variety could come up with was “well-intentioned,” which does describe characters like the child psychologist played by Robert Ryan and the boy’s foster parent, “Gramp” (Pat O’Brien), an Irish singing waiter. No, I’m not kidding.

There’s an anti-war message to The Boy with Green Hair, but it seems tacked on. The cloying sincerity of this picture is revealing of the naivety of late-forties activists, I suppose. In this regard, eden abbez’s song was an inspired choice.

4 thoughts on “The Boy with Green Hair”