“It took more than one man to

change my name to Shanghai Lily,” Marlene Dietrich tells her former lover in Shanghai Express (1932). This was before the Hays Code — just — when an actress could get away with a line like that. Dietrich plays “a woman of many casual affairs,” as Mordaunt Hall delicately put it in his review for the New York Times.

Mr. Hall was quite smitten. Dietrich, he wrote,  “. . . is languorous but fearless as Lily. She glides through her scenes with heavy eyelids and puffing on her cigarettes.” There is, indeed, the famous still of Dietrich, cigarette in hand, gazing skyward. Another of her in the train corridor wearing a negligee. This last one was too much for Vanity Fair. Director Von Sternberg “traded his open style for fancy play, chiefly upon the legs in silk, and buttocks in lace, of Dietrich, of whom he has made a paramount slut,” the magazine accused. 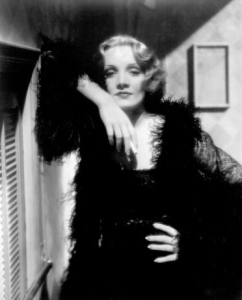 In fact, Shanghai Lily was reputed to have “wrecked a dozen men, up and down the China coast,” according to the friend of her paramour in the film, Doc Harvey (Clive Brook), but she never comes across as a slut. For one thing, she’s too fascinating, and she has no illusions about herself. We can’t help rooting for her, and in the course of a train journey from Peking to Shanghai, she proves her moral worth and wins her lover back.

Nearly everyone else on the train seems to be hiding something. There’s a half-Chinese warlord (played by a white actor in “yellow face,” Werner Oland, who would soon become famous for playing Charlie Chan), a disgraced French officer, a missionary, a gambler, a stuffy old lady and an opium dealer. Gradually we learn their secrets as the train is commandeered by rebels. Only the other woman of ill repute, a Chinese prostitute named Hui-Fei (Anna May Wong) demonstrates comparable courage.

This was Wong’s greatest role in American film. Mostly she was consigned to playing delicate flowers or Dragon Lady parts. Here she smokes a lot, to great effect (I’d put her right up there with Bette Davis), and never abandons her dignity.