Fidel Castro had just taken over Cuba when filming on Our Man in Havana began in April, 1959. He and Che Guevara dropped in on the set and fraternized with the cast; Maureen O’Hara was quite taken by Che, “a real freedom fighter,” in her words. This from a woman who adored John Wayne and Ronald Reagan.

I wonder what Fidel and Che made of Ernie Kovacs, who played the Havana police chief Captain Segura mostly for laughs. His real-life counterpart, Esteban Ventura Novo, was a notorious torturer. Graham Greene alluded to this sinister side of Segura’s character in the book. “There are people who expect to be tortured,” he tells the hapless vacuum cleaner salesman and reluctant spy Wormold (Alec Guinness), “and others who’d be outraged by the idea. One never tortures except by a kind of mutual agreement.”

Wormold, a middle-class Brit, does not belong to “the torturable class,” Segura blithely admits, whereas the poor in Cuba, and throughout Latin America, apparently do. Greene’s irony comes across better in the book, although Kovacs is brilliant in the checkers game, where the two adversaries use miniature liquor bottles in place of checkers.

I loved the novel, but I love the film even more. Besides Guinness, O’Hara, and Kovacs, you’ve got Noel Coward as the urbane (and slightly ridiculous) recruiter of secret agents, Hawthorne, and Ralph Richardson as the even more ridiculous spymaster “C.”  Burl Ives plays Dr. Hasselbacher, an emigré with a communist past. In real life, Ives had just named names before the House Un-American Activities Committee. In the film, he betrays Wormold, his only friend, then has second thoughts.

Our Man in Havana would be Greene’s final collaboration with director Carol Reed. It’s more light-hearted than the pair’s most indelible project, The Third Man, but still packs a punch. Viewed with a daiquiri in hand, it goes down quite smoothly.

It’s not difficult to understand what Anna saw in 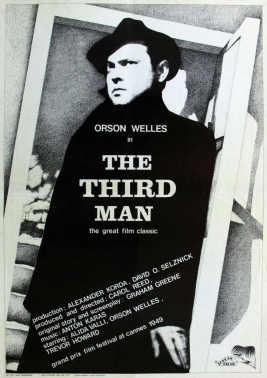 Harry Lime, the crooked American whose death is at the center of this film. Amid the ruined city of Vienna, the grim faces of its inhabitants, the climate of suspicion and paranoia that prevails throughout the occupied zones, regardless of which army is in charge, Harry stood out.  He never grew up, “the world grew up around him, that’s all,” Anna explains to Harry’s old friend, Holly Martins.  She refuses to face the truth:  that Harry’s black market dealing caused the deaths of countless children.  She prefers to hold onto her romantic illusions.

Can you blame her?  Three years after the Second World War ended, Europe — as embodied by the once shimmering cultural capital of Vienna — is bombed out, exhausted, physically and morally.  The grand ideals for which the war was fought are nowhere in evidence.  Freedom seems to be particularly lacking:  Holly is shadowed, manipulated and lied to, pushed around by the British occupiers, threatened by the black marketeers.

But there’s Harry, staging his own death to free himself from surveillance.  “He could fix things… [he knew] how to avoid this and that,” Holly says admiringly.  Holly himself is hopeless at fixing anything, barely able to look after himself in corrupt postwar Vienna.  Straightforward American integrity is a liability in this setting.  What’s needed is a clever liar like Harry.

And our first glimpse of him, sheltered in a doorway, unexpectedly illuminated by a streetlight, confirms the impression that he alone is at ease in the darkly-lit world. Look at how he’s smiling.

Seductive, the way he doesn’t let his guard down even when he knows you.  Even when you love him.  Irresistible to Anna, for sure.  I suspect that Harry Lime is Graham Greene’s alter ego. “I like to have a secret love affair, a hidden life.  Something to lie about,” the author of “The Third Man” once said.

Anything is possible from a man like that:  betrayal, certainly, but also excitement.  He gets his thrills from danger, and danger was everywhere in those days, but his zest for life keeps him one step ahead of the police.  Time and again you think he’s cornered during the dramatic chase in the sewers, but he manages to outwit his pursuers.  We see his fingers poking up through the grate the way a plant sends out new shoots.  Toward escape, toward the air.  Toward life.