Two Women is not quite as dark as the Alberto Moravia novel, La Ciociara (1957), on which Vittorio De Sica and Cesare Zavattini based this film. Part of the problem, I think, is Belmondo.

He’s miscast in the role of Michele, the coddled  intellectual with vaguely left-wing politics who mouths Communist slogans, rhapsodizes about “the peasants,” how the future belongs to them, and complains about privilege—this despite the fact that his family members are fascists who hoard food and consort with the German occupiers. Michele falls for Sophia Loren’s character, the widowed Cesira. She’s aware of his feelings, but she’s too full of life for him, too earthy.  A true woman of the people, although much more beautiful than most people.

“With my own memories to draw upon, you would think I would have had an easy time of it [making the film]. But it was very hard for me to relive my girlhood terror and at the same time to transform the reality of my feelings into the role I was acting. In memory, I still looked at my experiences with the eyes and emotions of a girl, but the role demanded that I see them with the eyes of a tortured woman.”  –  Sophia Loren

Morally speaking, nobody comes off well in this picture. But that’s what makes it so powerful.  Cesira’s human weakness is apparent from the very beginning. War destroys the vulnerable, while pointing up the hollowness of ideals such as Michele’s. Death is random and undeserved; violence and brutality triumph, and who has sympathy to spare for his neighbor? Only grief unites those who have survived atrocities, and even so, the comfort of shared suffering is fleeting.

Moravia set his story in the countryside 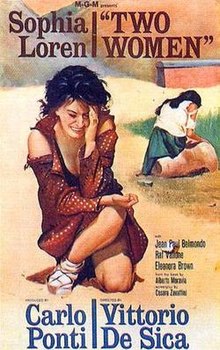 around Rome in the last months of World War II. He and his wife had fled there after the Germans occupied Rome, arriving in an impoverished village filled with widows (all the men had been drafted and sent to Russia, where they died). For nine months they lived among the peasant women, scavenging for food, watching dogfights in the sky and trying to avoid being strafed, while they waited for the Allies to liberate their country. But liberation arrived in the form of the Moroccan Goumiers, irregular colonial troops who were fighting with the Free French. In the aftermath of the Allied victory at Monte Cassino, thousands of Italian women and girls in the region were raped by the Goumiers. This is Moravia’s story, the central crisis of the novel, and De Sica shows it in brutal detail.

“Isn’t there some safe place in the world?” Cesira asked Michele at one point. Apparently not.