I don’t want to neglect Marlene Dietrich’s performance, or the terrific Heinrich Mann story on which “The Blue Angel” is based, but let me begin with the style of this picture.

Josef von Sternberg had a painter’s eye.  Every scene he directed is composed like an Expressionist work of art.  Take a look at some of Max Beckmann’s etchings.  Dressing Room, for example, 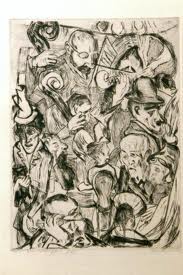 Now watch this clip from the film.  There you go, a mini-course on Weimar art and you get to listen to Dietrich sing “Falling in Love Again” as an added bonus.

Von Sternberg cared more about the look of his pictures than about the feelings of his actors, whom he regarded as “marionettes, pieces of color on my canvas.”  But Dietrich was the perfect marionette, and the legendary affair they conducted during the filming of “The Blue Angel” contributed to her reputation as a femme fatale, enabling audiences to see her forever after as von Sternberg did:  sensuous, provocative, cruel, and utterly irresistible.  The type of woman who leads men to their doom — and they go willingly — and sings about it afterwards.

Emil Jannings specialized in playing degraded men in German films.  As Professor Rath, the high school teacher who falls for Dietrich’s Lola Lola, his performance is so perfect it’s painful to watch.  But it rings true, the way his childlike infatuation with the cabaret singer turns into jealous rage as Lola tires of him and drifts to another man.  The original story had more of a message.  Von Sternberg chose to end with the image of the dying professor clutching his desk, as if trying to regain his lost dignity.  Meanwhile, back at the Cabaret, Lola straddles a chair and lures her next victim with a sly song.  “Watch out for blondes, they have a certain flair, for stripping you bare and then leaving you.”

Forewarned is not forearmed in this case, I’m afraid.